Over the past few weeks very little has changed in the Alberto Contador saga.  He has thrown the Spanish beef industry into the spot light with Spanish cycling magazines starting to read much like ‘Farmers Weekly’ – running headlines like ‘Spanish police uncover clenbuterol ring doping horses, livestock’  possibly adding credence to AC’s story of minute traces of the drug showing up as a result of eating contaminated steak, but probably not.

It has also highlighted what first off appears to be double standards in the UCI’s method of treating different levels of cyclists.  Other cyclists recently discovered doping have felt the wrath of the UCI’s ‘zero tolerance towards doping‘ almost immediately and have summarily been branded and banned.  What about Alberto?  UCI president Pat McQuaid, asked for patience in the ongoing Contador investigation as the World Anti-Doping Agency reviews the case.

Moving on, Johan Bruyneel  has finally been fined and suspended for the jersey swapping antics during the final stages of the Tour this year. 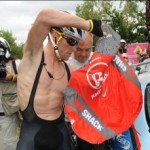 This was surely no surprise to him as he had already apologized publicly a week after the Tour.

In July the UCI said that because of RadioShack’s good intentions “any fines levied as a result of this matter would be donated to the Swiss League Against Cancer.”

Isn’t this a little like giving the candy to the toddler after he starts  thrashing around on the floor, as the poor dear just didn’t know how to express himself clearly and obviously had good intentions?

Lance could always stand out in a crowd and he knew that the jersey swapping antics would cause a stir and get them the extra publicity they needed. So he made the last stage of this years tour work for him.  It would after all be his “last ever” stage in the race, he had to make a statement.

Maybe I’m being too harsh.  Here’s hoping the Swiss league get the promised funds.

And finally the 2011 TdF route was revealed and it seems to be favoring the climbers.  Apparently according to the team managers there are no clear yellow jersey favorites for next year, they felt the jersey would move around the teams a bit during the 2011 edition of this 3 week race.

That being said, Samuel Sanchez felt confident of his chances and of course there are always the Schleck brothers

with Andy saying ““We want to win the Tour next year, whether it’s me or Frank”.

Ivan basso is not to be discounted either, the 2010 Giro d’Italia winner is set to focus mainly on the Tour de France next year making him a worthy rival.

Of course there is always AC, he wasn’t there for the route unveiling causing a bit of a stir, lets hope the UCI can wrap this up quickly.   Like a prego steak roll with all the extras ….